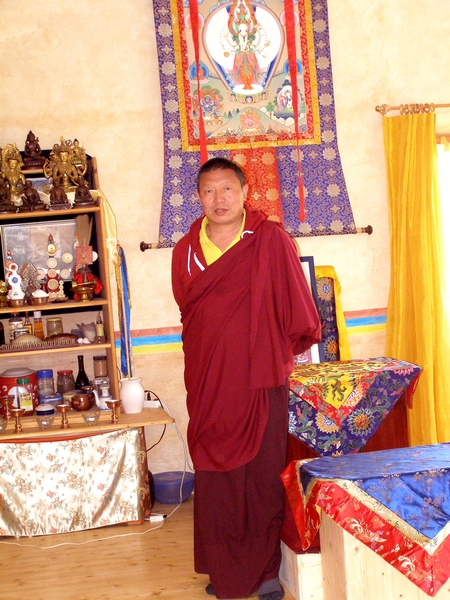 He was born in winter 1964 in Kham, eastern Tibet in a family of cattle farmers with a great faith in the Buddha’s teaching. He attended Chinese state schools until the age of 17. He then chose to take the Path by receiving the teachings from the Kagyu Lama Droutchen Karnor  or Gyoune Drouptchen who was living in the solitude of the mountains (grub chen kar nor ou rgyu ne grub chen), known as another Milarepa and from the yogi Ngawang Tsultrum (ngag dbang tshul khrums), graeat master of the Nyingma School, the Ancient School.

He received the renunciation vows from his first Master and did several short retreats.

At 20 he went for a one year pilgrimage through Tibet, visiting sacred places. He then arrived in Nepal and remained at the monastery of Nagi Gompa, where he received transmissions, empowerments and teachings of Tulku Orgyen Rinpoche. At that time he met many Masters of the Kagyu Lineage, including Shamar Rinpoche.

He studied at Rumtek from 1986 to 1993 at Karma Shri Nalanda Institute. There he mainly studied the Path of Buddha philosophy, and on this occasion he received many empowerments, transmissions and teachings from Djamgueun Kongtrul Rinpoche, Gyaltsab Rinpoche, Thrangu Rinpoche and philosophy teachings from Khenpo Tcheudrag and Khenpo Tsultrim Gyatso.

In 1993 he began teaching philosophy at the Karmapa International Buddhist Institute in Delhi. In 1995, Shamar Rinpoche gave him the title of Khenpo (scholar in the teachings of Buddha). Since 1997 he has been teaching in other Asian countries and the United States, Russia and Europe.

Between periods of teaching, he did  three 6 months retreats in Pharpin Nepal.

He regularly goes to Kalingpong to practice at the Shri Diwakar Vihara, Buddhist Institute for Research and Education (Shedra) Westbengal in India.

He is in France in Paris since May 2010 and teaches in various countries in Europe and elsewhere.