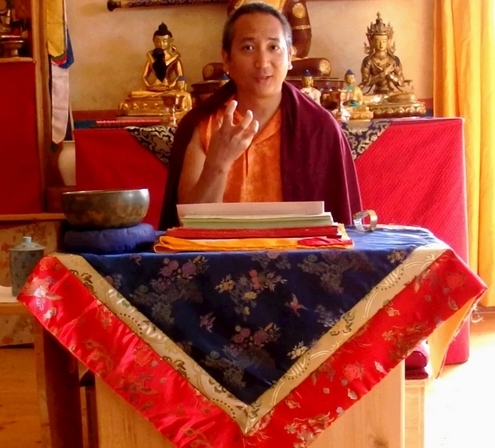 Lama Kunzang Namgyal was born in a family of Tibetan practitioners in 1970. He entered the Nyingmapa monastery of Dehra Dun at the age of 6, where he studied until his arrival in France in 1986. He received there all the empowerments of the Rinchen Terdzö from the Venerable Khyentse Rinpoche.

He is the nephew of Lama Teunzang, spiritual mentor of the Center of Montchardon, where he also studied for several years before leaving for the traditional retreat of 3years and a half in Parping, Nepal, under the guidance of his Master, the Venerable Lama Sherab Gyaltsen Rinpoche .

In 2011, he founded the Center of Karma Dedjung Ling in Longchamp near Dijon of which he is the director and where he teaches Dharma and meditation.

He has been living in France for almost 30 years, his French is fluent and he teaches in French. His teachings are accessible to all and tinged with a lot of humour.