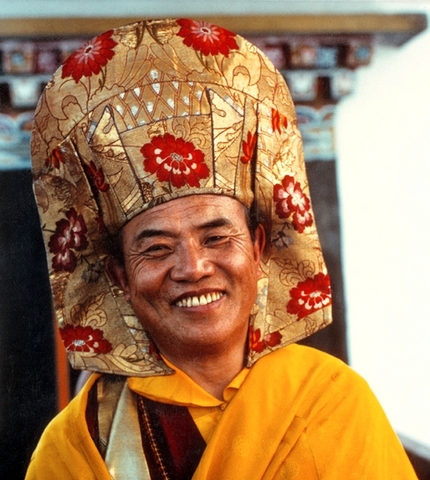 Rangjung Rigpay Dordje (Wylie Rang ‘byung rig pa’i rdo rje) (august 14th 1924 – novembre 5th 1981) was an important person of the Buddha Path in Tibet considered in this tradition as the 16th incarnation of the Victorious Karmapa.

Spiritual Master of the Karma Kagyu lineage, he was born in Denkhog in the town of Derge in Kham (eastern Tibet), near the river Dritchou in a noble family named Athoub.

The tulku Tcheukyil Dorje (the fifth Dzogchen Rinpoche, Thubten Chokyi Dorje), Master of the Nyingmapa Dzogchen Monastery , had predicted the birth of a great Bodhisattva to the mother when she was pregnant. On his advice, she settled in a cave where Padmasambhava had meditated, until birth.

The 11th Tai Situ Rinpoche recognized the child as the new Karmapa. The details of the birth corresponded to the indications mentioned in the prediction letter left by the 15th Karmapa to his assistant, Djampal Tsultrim. The child was brought to the monastery of Palpung where he received his first ordination, and took the vows of Bodhisattva with Tai Situ Rinpoche and Kongtrul Rinpoche of Palpung, the two main disciples of his predecessor.

Rangdjoung Rigpa Dorje studied with Bérou Khyentse Rinpoche and the great pandit Bo Gongkar , celebrated as the last great scholar of the Kagyu Kamtsang at that time. Gongkar Rinpoche had memorized the entire Tripitaka and counted among his students the accomplished scholar Sakya Detchoung Rinpoche . While studying with Gongkar Rinpoche, the 16th Karmapa told his Lama episodes of his previous existences.

A few years later, the 16th Karmapa was invited to visit China, but did not accept this invitation personally, preferring to delegate Berou Khyentse Rinpoche to represent him. At Dzongsar, the monastery of Jamyang Khyentse Chokyi Lodro, the great scholar Rime, Rigpai Dorje performed the ceremony of the Black Crown. Khyentse Rinpoche saw Rangdjoung Rigpai Dorje under the aspect of Tusoum Khyenpa, the first Karmapa. Back in Palpung, Rigpai Dorje received Empowerments, Ritual Readings and instructions on all spiritual practices of the Sakya tradition (Drupa Thap  Kun Tu).

In 1940, the 16th Karmapa undertook the journey back to Tsurphu. There, during the fallowing 3 years, he devoted himself intensively to practice. In 1947, with the 14th Dalai Lama, 16th Karmapa went to Sikkim, Nepal and India, to visit places of Buddhist pilgrimage.

In 1955, serious conflict broke out in the districts of Derge and the Shin-Nang in Kham. The 16th Karmapa went to Tchamdo when he tried to bring peaceback  between the Khampas and Chinese forces. Both sides promised to observe a truce for five years.

In early 1957, serious conflicts had again erupted in Kham. A flood of refugees flocked to central Tibet. Among them were many Kagyu lamas such as the 9th Sangye Nyenpa Rinpoche, Tai Situ Rinpoche, Tralep Rinpoche and their followers, who came to Tsurphu. At that time, the 16th Karmapa recognized the new Kongtrul Rinpoche of Palpung and Bongsar Khyentse Rinpoche . From Shechen Kongtrul, the 16th Karmapa received the scripture transmissions and teachings of  Longtchen Dzeudun, the deep work in seven volumes of Longtchenpa dealing with the Maha Ati (Dzogchen).

From Kham, inexorably, the conflict reached central Tibet. The 16th Karmapa sent Tai Situ Rinpoche, Sangye Nyenpa Rinpoche and meditation master Kalu Rinpoche to Bhutan. The young Jamgœun Kongtrul of Palpung was sent to Kalimpong, India, in his family,  the wealthy merchants Sandou. Contrariwise, the 16th Karmapa himself refused to leave at that time, saying he would go to Bhutan if the situation got worse. His intention was to stay in Tsurphu until the last moment in order to provide assistance to refugees. The conflict between the Chinese Communist army and the  Khampa resistance were now raging throughout Tibet.

Realizing that he now had to leave Tibet in order to ensure the preservation of the Dharma, the 16th Karmapa decided to leave. At the border of Bhutan and India, the 16th Karmapa met with the Prime Minister of Sikkim which transmitted the invitation of the Maharaja Tashi Namgyal to come and reside in Sikkim. The 16th Karmapa accepted the invitation and was warmly welcomed by the royal family and the people. He was asked where he wanted to settle. He replied that as Tibetan refugees, he kept the hope of returning to Tibet some day. However, since the 9th Karmapa had built the monastery of Rumtek, he wanted to establish there his headquarters in exile.

During the winter of 1959-1960, the 16th Karmapa went to India where he first met the 14th Dalai Lama in Benares and later, the Pandit Nehrou , who was then Prime Minister. During the summer, the 16th Karmapa bestowed many Empowerments to the crowd that thronged around him to see him. The Governments of Sikkim and India gave him significant funds to help build a new monastery on a thirty-hectare site near the old Rumtek monastery. The 16th Karmapa ordained more than 3,000 monks and  recognized many tulkus (emanation body). He published a new edition of the Kanjur, the encyclopedia of the Buddha’s teachings.

In 1974, he asked Gendun Rinpoche to found a monastery (Dagpo Kundreul Ling) in Auvergne, traditional retreat centers and a temple in France. A large study center is also established in Dordogne,  Dagpo Kagyu Ling. He completed three tours around the world. On his the third trip he went to  America and Southeast Asia. Thus he established Dharma centers and monasteries everywhere, to protect, preserve and spread the Buddha’s teaching.

The 16th Karmapa passed away on November 5th, 1981 in the United States at the Chicago hospital. He was cremated in Rumtek. Kalu Rinpoche during his visit to Dagpo Kagyu Ling in November 1984, confirmed what  the 16th Karmapa had predicted, that is to say that the activity of his 17th incarnation would be even more vast in the world than the previous one.

The Gyalwa Karmapa Rangdjung Rigpaiy Dorje is both the Essential Root Master of Lama Tsultrim Gyamtso and the Master of the lineage to which he is related. 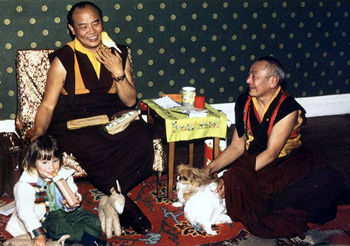 The Gyalwa Karmapa with Guendun Rinpoche