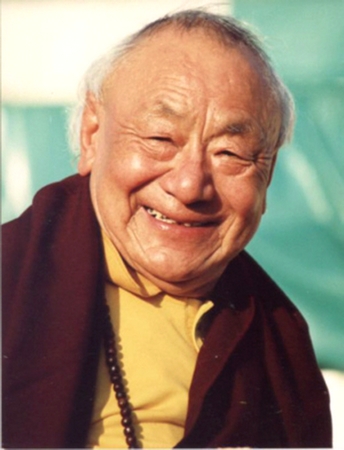 Gendun Rinpoche  also called Lama Gendun is a Tibetan master of the Kagyupa school of the Buddha Way prevalent in Tibet in the transmission of Vajrayana.

He was born in 1918 in eastern Tibet, in Kham. Lama Gendun yearned for spirituality. Rinpoche talks of this period in these terms: “Although I had received no religious education, all my mind aspired to the holy Dharma. I watched the life my parents led ,   ordinary and straight people. But seeing them only concerned with this existence, I thought: All concerns in the world are useless and with no future. What’s going to happen after death? An ordinary life does not create any good, it can only lead to suffering. “

Around the age of seven, Lama Gendun then began his apprenticeship in the monastic life. He remained for years to learn how to meditate with the teachers who stayed in the monastery. He aspired only to the practices of the Vajrayana, the quick path to attain enlightenment.

At 17, he received monastic ordination and did the traditional three years and three months retreat , the minimum age of 21 was required to do so, so his parents  offered the missing years of their lives so that he could realize his wish. He achieved many spiritual realizations. After this three-year retreat, he remained several years in the monastery of Khyodrag in solitary retreat to lead his meditation to completion. After several years of intense practice, his Master came to him in his cell and said, ‘Now you have freed your mind, you can go where you wish and benefit beings.’

Then he made a pilgrimage, during which he constantly meditated in many sacred caves throughout Tibet. Twenty years went off in that way.

In 1959, the Chinese military occupation of Tibet forced many Lamas to flee. Gendun Rinpoche accompanied by two other Masters left and went India without being bothered. He went to see the 16th Karmapa, the spiritual leader of the Karma Kagyu school. He was given the direction of a monastery in Bhutan. But this life did not suit Gendun Rinpoche, he aspired to the solitary life of a hermit. The 16th Karmapa then authorized him to live in the house of a benefactor in Bengal, where Gendun Rinpoche remained in retreat for a dozen years. On this occasion Pourtsela joined him and accompanied him.

In 1974, the 16th Karmapa said to Rinpoche: “I am going to Europe and America. Westerners, despite their material well-being, are ignorant of the Way to enlightenment, and therefore experiment a lot of suffering from the afflictions that trouble the mind, pride, jealousy, desire, hatred … Only an authentic spiritual path can solve their suffering. If the conditions are gathered for the propagation of Mahayana (the way of the Great Vehicle that develops the enlightened mind for the benefit of others), then it is you who will be responsible for its development in Europe. Lama Gendun then argued about his inability and ignorance, but the Karmapa said, ‘there is nothing to talk about, I know the signs, I know you’re a Lama who led his practice to completion. The time has come for you to accomplish well-being of others. […] So, you will settle down in Europe. Do not be worried. You have the necessary karma to accomplish this task. The time has come for you to implement it. I am the Karmapa, if you have even a little faith in the name of Karmapa, you have to believe my words’ he says with a laugh.

Thus, Lama Gendun Rinpoche arrived in France in August 1975. He traveled in most European countries. He taught in the center of Dagpo Kagyu Ling in Dordogne, which had been offered the Gyalwa Karmapa and became an important center for the teaching of the Buddha Dharma.

In 1984 he founded Dagpo Kundreul Ling in Auvergne with its three years three months retreat centers, its monastic hermitages and its great temple. He trained many Western Lamas.

Karme Dharma Tchakra was the first non-Christian monastic congregation recognized by the French government. The ceaseless activity of Gendun Rinpoche enabled the creation of many centers all over France (the Karma Teksoum Chöling centers )

He passed away on October 31rst, 1997, in his room in Dagpo Kundreul Ling in Auvergne.

He was cremated forty days later. All his Western disciples were assembled for the occasion. Some of them who had great faith in him could see wonderful signs at this particular time as the vision of his head with a crown. Those who had faith could also see outside the manifestation of elements that were expressed in a marvelous way obviously showing the impermanence through the four seasons movement which came one after the other without exception throughout the ceremonies: the strong fall wind, winter snow, spring rain and then summer sunshine and blue sky. Today some of his followers faithfully and respectfully continue to transmit the richness of his teachings as much as possible so that it continues to benefit beings.

The Venerable Lama Gendun Rinpoche is the Root Master of Lama Tsultrim Gyamtso. 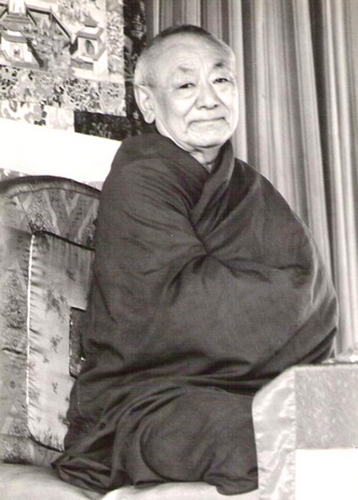