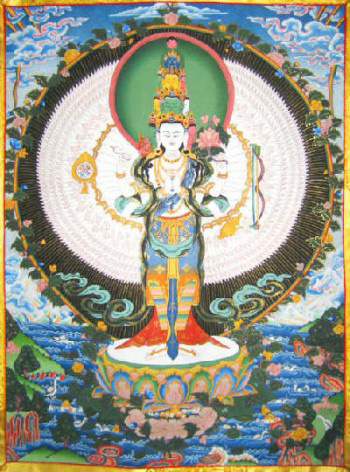 The practice is mainly based on the development of love and compassion through the pure support of meditation which is the manifestation of one thousand arms Chenrezig.

The practice consists on a first day of partial fast and on a second day of strict fast with ethic vows.

Introduction to the practice:

Nyung Ne practice means to remain in asceticism. It is a meditation practice which includes the respect for three types of vows: the vows of Vinaya respecting the eight branches of Sodjong vows which are:

For Nye Ne and Nyung Ne the vows are the same. For Nye ne we can eat and drink at the authorized times, and we can talk moderately in a meaningful way. On the day of Nyung Ne we do not drink, do not eat and do not speak.

By the way we make these vows and turn our mind in practice, we develop the altruistic mind of enlightenment; that is why this practice is part of the practice of the Great Vehicle (Mahayana). Through meditation on love and compassion shown by the appearance of eleven faces and a thousand arms Chenrezig and reciting his mantra, we also practice the vehicle of Secret Mantra, called Vadrayana as well.

Thus, it is taught that if we practise perfectly Nyung Ne, we become an owner of the three kinds of vows.

We practice the ritual of eleven faces Chenrezig three times a day.

A Nyung Ne takes place over a couple of days: the first day we have a simple rice soup in the morning at 7 o’clock and at noon we eat an exclusively vegetarian meal. During the breaks we can refresh with drinks. On the second day, we do not eat or drink or talk until the following morning at the time of rice soup. A Nyung Ne ends at 9 AM on the third day.

Sometimes we say the long prayer to take birth in the Pure Land of Great Bliss or we read the practice of the Medecine Buddha.

The French texts are available on site.

Engagement on the path to enlightenment with altruistic motivation, going under the protection of the three ‘rare and sublime’ that we also name the ‘three jewels’, that is what we call taking refuge. In the Vajrayana as in other schools in the Buddha’ Teaching, we are under his protection, which represents the perfect Enlightenment. We take refuge in the Dharma, which is the teaching, the path to Enlightenment and in the Sangha, the community of Enlightened beings who are guides that enable us to follow the path without any error. Furthermore we also are under the protection of the three roots that are Lamas, Root and of the Lineage, Ydams, which are aspects of the Buddha and the Teachings Protectors.

If you have never taken refuge, it would be better to do so because it is preferable to have these vows if you want to start a Vajrayana practice such as Nyung Ne.