Categories Menu
Preliminaries to the Great-Seal 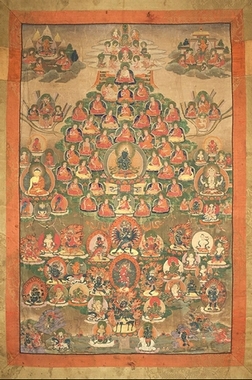 The Six Sources of Refuge

The preliminaries to the Path of the Great Seal (Ngöndro) are a very important aspect of the Path as they establish a steady and certain foundation to progress without any mistake.

They include reflection on the four thoughts which turn the mind away from the appeal of the ordinary activities of the cyclic existence, and are called common preliminaries.

On this basis, the four non common preliminaries are practiced, usually by doing a series of one hundred thousand of each.

This foundation sets up the mind in a very favorable state to be able to receive the grace, which is itself a crucial aspect to the accomplishment of enlightenment

This practice requires some stamina and requests a special investment.