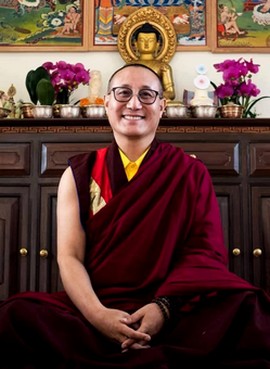 He grew up under the Chinese occupation which did not allow the practice of Buddha’s teaching, but his father, a Lama, taught him secretly the Teaching-of-Awakening. In 1979, when the attitude of the Chinese government began to soften, Lodrö Rabsel Rinpoche was 15 years old and he went to a monastery to become Lama.

In 1982, the 14th Shamarpa identifies him as the true incarnation of the great Kagyu lineage Yogi Lodrö Rabsel.

After his studies, he spent three months in Nepal where he received teachings and empowerments from Kagyu, Nyingma and Sakya masters. Then, back in Tibet, he takes up on a pilgrimage that will last nearly six years, especially on holy sites related to Guru Rinpoche and Milarepa; he meditates in caves, goes on foot from Lhassa to Mount Kailash, and goes around the sacred mountain prostrating himself. Later, he studied Tibetan medicine and he held the position of Droupeun (Retreat Master) in a monastery in Tibet.

In 1993, he studied for three years at KIBI, in Delhi, India, with Khenpo Tcheudrak Rinpoche.

Then, Shamar Rinpoche sent him to Malaysia where he has many disciples and where he directs every year the practice of the accumulation of one hundred million MANI.

For several years, he has been in charge of collecting all the texts of the lineage masters, especially of all the Karmapas and Shamarpas, to restore the deteriorated parchments and to digitize all the texts of the Marpa lineage (Marpa Kagyu Text’s preservation Center).

He teaches in Tibetan and is translated into French.