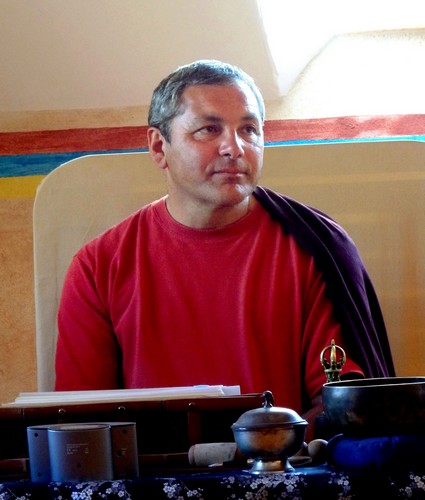 Born in 1959 in the south of France near the Mediterranean coast, in a Christian family, he was brought up with a good moral education according to this tradition.

At the age of 17, without denying his background, he joined the Teaching of Buddha during the summer 1976.

In January 1977 he met the Very Venerable Kalu Rinpoche from which he received the Vows of Refuge.

He met the Sixteenth Gyalwa Karmapa just after that and he received from him several important Empowerments.

On these occasions, His Holiness performed many times the ceremony of the Black Crown.

In 1977, he asked the Venerable Lama Tönsang to teach him the Dharma, received from him the vows of Bodhisattvas, some Empowerments and learned the Tibetan (reading and studying of the Sacred Texts, and also the spoken Tibetan), as well as rituals including the practice of traditional musical instruments, the preparation of tormas and much more.

He also learned a lot in the very intense and hard work he did with him and together they also carried out all the daily practices. The Venerable Lama Tönsang passed on to him many Teachings, Practices and Special Instructions, until he sent him to perform the traditional three years, three months, three days retreat with the Very Venerable Gendün Rinpoche in 1984.

He went for a pilgrimage with the Venerable Lama Tönsang in many sacred places in India and Nepal, and during that time, in February 1980, at Samdroup Dardjeeling (a monastery near Sonada), he received the Getsül Vows (of Those who Behave According to the Virtue, the monastic ordination) with the Venerable Kalu Rinpoche who also gave him some teachings.

In Rumtek, headquarters of the Gyalwa Karmapa (Sikkim), he received from the Sixteenth Karmapa Rangdjoung Rigpai Dorje several Empowerments and again attended to ceremonies of the Black Crown. It is taught that, during this ceremony, the Gyalwa Karmapa truly performs Chenrezig’s activity (Avalokiteshvara) and that the sight of the Sacred Crown is liberating.

At the age of 24, in 1984, he entered the strict traditional retreat of three years, three months, three days. He received from Gendün Rinpoche the complete transmissions in order to become an instructor able to guide others on the path to Enlightenment. At the end of the retreat in 1987, he was given the title of Lama (literally: Unsurpassable Mother).

Shamar Rinpoche who oversaw the retreat conferred transmissions and Empowerments. During this period, the group of retreatants received a Transmission and Instructions from Phawo Rinpoche. Kalu Rinpoche and Sitou Rinpoche also visited them and they got some advice from them. Lama Tönsang came to visit them once a year and gave transmissions.

At the end of the retreat, Jamgön Kongtroul Rinpoche, passed on Empowerments, transmissions and complete monastic ordination (Gelong: Those who Adopt Virtue).

Each of the Masters who had met them, praised Gendün Rinpoche on all the practitioners of this first retreat that he guided excellently and exceptionally.

In spite of his wish to keep on in retreat for life, when he completed this retreat, the Venerable Lama Tönsang called him back and asked him to assist him in Karma Migyur Ling (Dharma center in Isère). He taught and guided practices for one year. Then he started his first retreat of one hundred Nyung Ne at the request of the Lama. During this retreat, inspired by the grace of Chenrezig, he made the vow to accomplish an accumulation of one thousand Nyung Ne for the benefit of all beings. This special kind of group retreat enables to accumulate the Nyung Ne practiced by all participants, which multiplies and enlarges the virtuous accumulation. In the Dharma center of Karma Migyur Ling, he completed seven retreats of one hundred consecutive Nyung Ne.

Then, as he wanted to realize Gendün Rinpoche’s wishes and advice about the implementation of a place of retreat in the mountains, he decided to leave Montchardon to accomplish this goal. Thus, he required the permission of his master, and members of the congregation who gave him their unanimous agreement to leave Karma Migyur Ling. Although Lama Tönsang did not wish to see him go, he nevertheless gave his approval.

After his departure in 1996, he gave back his monastic vows to Gendün Rinpoche and decided to adopt a life outside the monastic environment, still practising the Dharma in a more informal manner, and leading a married life.

During this transition period, sometimes difficult go through but rich with profitable experiences, he continued nevertheless to practise and give meditation instructions to those who asked him for it. During this period, he received Transmissions and blessings from the Karmapa Trinle Thaye Dorje, Shamar Rinpoche, Jigme Rinpoche and the Venerable Lama Tönsang to whom he always remained loyal. In May 2001, The Venerable Lama Tönsang asked him to develop his activity for the benefit of all beings and build a place of practice to achieve this task. He gave advice and came to bless the place of retreat from the very beginning until its completion.

In autumn 2004, as the conditions were favourable again, he decided to continue his commitment to complete the practice of one thousand Nyung Ne. Although the accumulation of a thousand Nyung Ne came to an end, Nyung Ne retreats go on regularly.

He now wants to focus on the practice of Mahamudra which seems most appropriate to the Western mind.

He shares his life with his heart companion and wife Katja, they pursue together a harmonious life of practice and sharing of the Buddha’s Teachings, with an opened and relaxed mind while adapting to the request and needs of everyone and still remaining faithful to the transmissions received.

What we read in the Lama’s pathway above was written at the request of his friends and followers who regretted he did not speak of himself on the website.

That is why he explains briefly where he comes from, he describes succinctly his pathway and states the transmissions he has received

This is done in order to understand that a Lama is part of an uninterrupted authentic spiritual transmission lineage. To be able to teach, he has necessarily himself received the complete transmission and the injunction of his Masters to transmit, at his turn, what they gave him.

One never decides by himself to be a spiritual guide. It is only his masters, themselves qualified and accomplished in practice, who can determine if the disciple is able or not to transmit the instructions of his own lineage.

His spiritual training was very rigorous and this difficult training, added to his Mediterranean temperament with all qualities and flaws, explains his strong character.

Thus, he speaks freely, without ambiguity and without hypocrisy. He does not mince words. He is sometimes harsh, intransigent, but his aim is always to help everyone improve.

He is enthusiastic, he is a man with convictions who does not accept compromises which are illusions. He answers frankly to everyone and straight to the point and his words can sometimes be tough.

One may happen to be disturbed by his attitude, but that is how he is.

He is at everyone’s disposal, easy to reach and gives his time without limit.

He has affinities with authentic and profound people. He appreciates those who are themselves and do not try to give a different appearance than their own.

His way of teaching

Usually, the practices or prayers are said in French. The texts are touched up, improved or translated by the Lama with a constant concern to keep the meaning and the words of the original texts, and this, in perfect accordance with his Masters who have encouraged him to do so

In particular Gendun Rinpoche, his Root Teacher, taught him that after receiving the complete transmission in Tibetan, it would be necessary to transmit in his turn the Teachings, Transmissions and Practices in his own language.

We thank them in advance for their effective and precious help for the development of the Buddha’s Teaching in all the languages of our world for the benefit of beings so that written materials can help to dispel the everyone’s ignorance.

Thus, the practice and the teachings are suited to this retreat place, and may be different from those you already know, because each Master teaches and practices according to his own inspiration and qualifications.

Your stay will bring you more benefit if you practice without preconceived ideas, with a new and positive mind.

May our views, meditations and actions always go in the direction of the way to enlightenment and let us fully achieve the temporary and ultimate well-being and happiness for all! 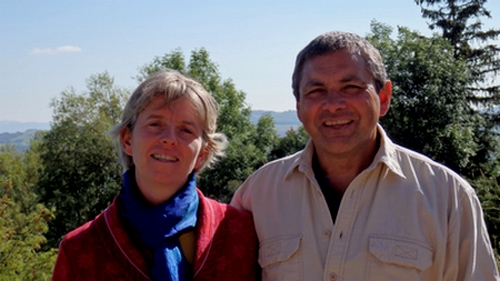